The Whitehall Spirit® brand includes an extensive line of unique, elegant rowboats produced since 1987 by Whitehall Rowing & Sail in Victoria, BC. These boats are built and delivered to discerning customers located worldwide.

These are impeccably built boats that appeal to people with a spirit of adventure and particularly those who love being outside on the water in fresh clean air. Owners love these boats because they are a pleasure to row in calm water, right at home in wind and waves, and are built to last generations. 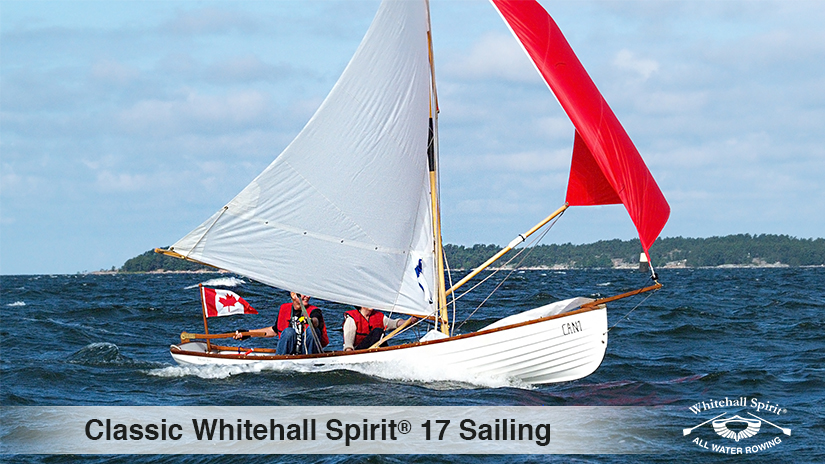 The original boat models produced by Whitehall Rowing & Sail were the Classic Whitehall Spirit® rowboat models. They are directly descended from fast, seaworthy traditional rowing boats in common use over 100 years ago. Originally the Whitehall style rowboat was designed for quick transportation of people and not bulky heavy cargo, which means they were sleek and fast. They were called ‘Bicycles of the Sea’ and used for pleasure rowing, as well as workboats, such as police harbor patrol boats, water taxis, pilot boats, and were popular as race boats. 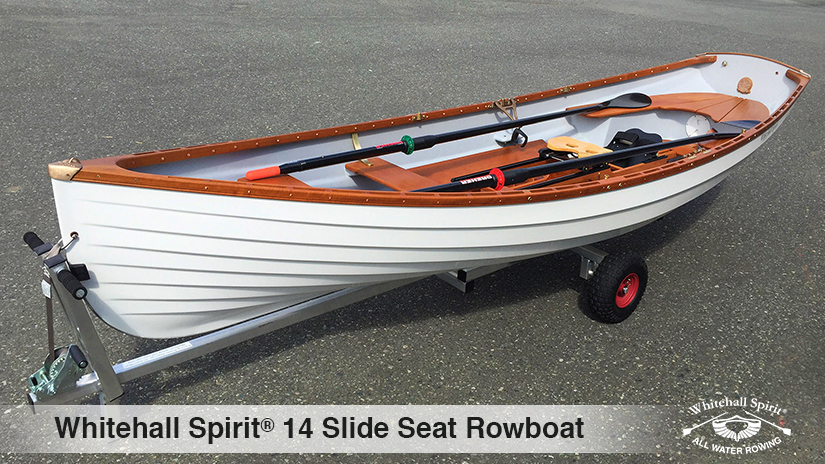 The first Classic Whitehall Spirit®, the 14’ model, was designed in 1985 by Harold Aune based on lines obtained from Mystic Seaport Museum in Newport, Rhode Island. Like all the ‘Classic’ models built by Whitehall Rowing & Sail, this boat is hand built by highly skilled craftsmen featuring a flawless fiberglass lapstrake style hull, impeccable teak woodwork, and custom cast bronze fittings. Classic Whitehall Spirit® rowboats built over thirty years ago by Whitehall Rowing & Sail are still rowing or sailing, and likely will be for several more generations. 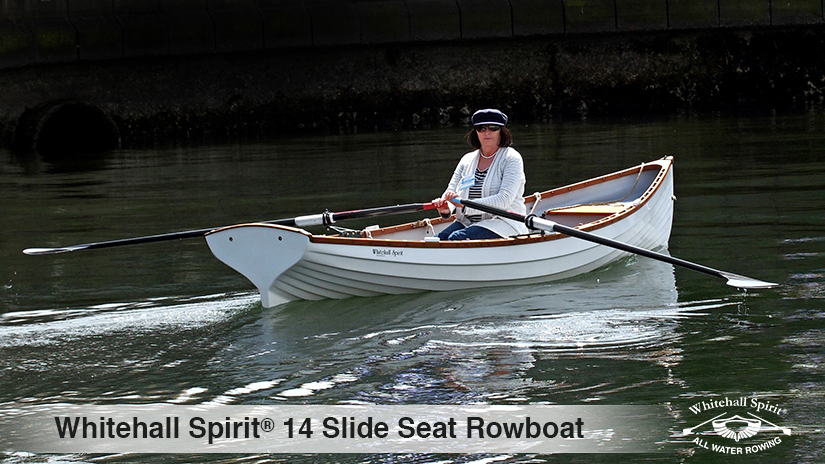 Classic Whitehall Spirit® models are built in two sizes, a 14’ model and a 17’ model. Both are available in three versions; traditional rowing, slide seat rowing, and sailing models, or a combination of all three versions in one boat. 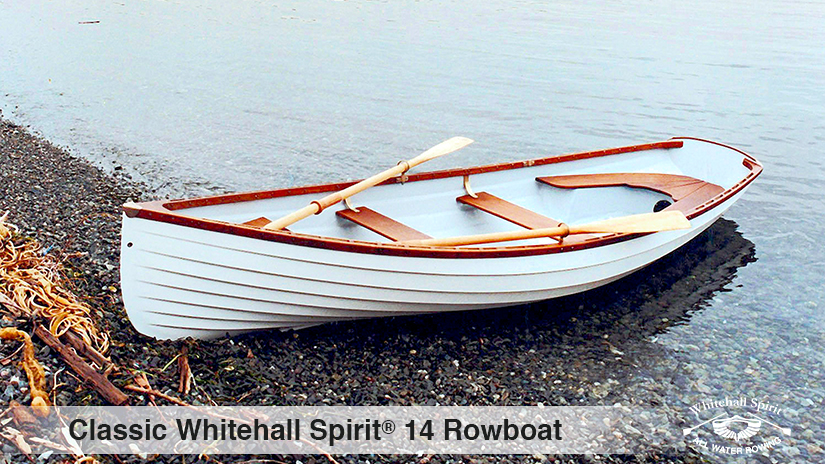 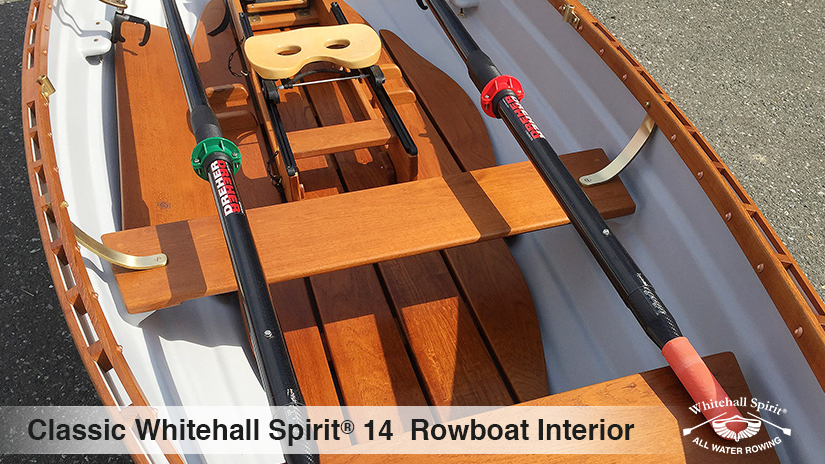 Whitehall Rowing & Sail was the first professional builder to equip all- water style rowboats with sliding seat sculling gear, turning them into efficient exercise and fitness machines. The ergonomics of their slide seat sculling gear satisfies the most experienced competitive shell rowers and also those new to the sport of rowing. These are safe stable boats that provide rowers the opportunity to row any time of day, in flat calm water, or in moderate wind and waves. Superior stability gives anyone new to rowing the opportunity to learn a proper rowing stroke with zero chance of flipping over, a common risk when learning to row in a skinny rowing shell type of boat. 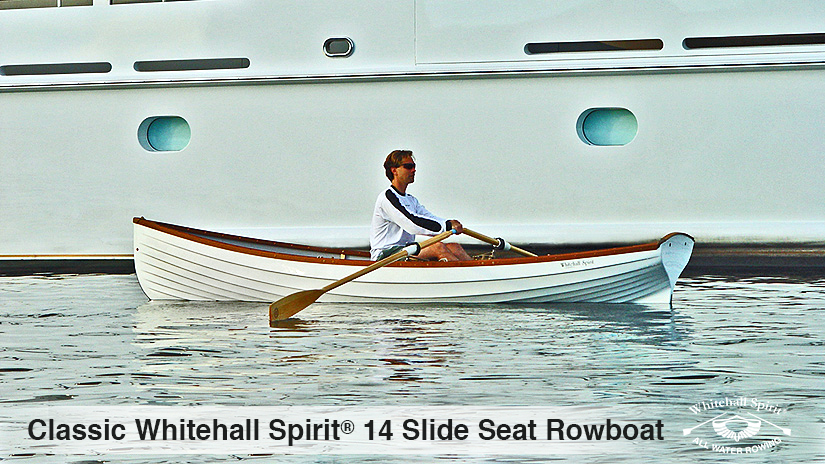 As mentioned the Whitehall rowboat was originally designed not for carrying cargo but for transporting people and was known as the Bicycle of the Sea, although a more direct comparison would be ‘”The Mountain Bike of the Sea’. This is due to the superior way they handle rowing in wind and waves. A Classic Whitehall Spirit® 14 sculling rowboat fitted with a sliding seat, hinging bronze outriggers and carbon fiber 9’6″ sculls is the perfect fusion of modern materials in a classic rowboat design. This modern-day Whitehall fitted out with ergonomically correct modern sculling gear is a top choice for the ultimate fitness rowing boat that will be in use for generations.

Slide seat rowing gear adds a major amount of additional power as the power of both legs is incorporated into the row stroke. Power comes about two-thirds from the legs and one third from the arms and back. Almost all of the body’s muscles are utilized in a non-stressful way. Slide seat rowing in a Whitehall boat is considered to be one of the best forms of stress-free fitness exercise available. 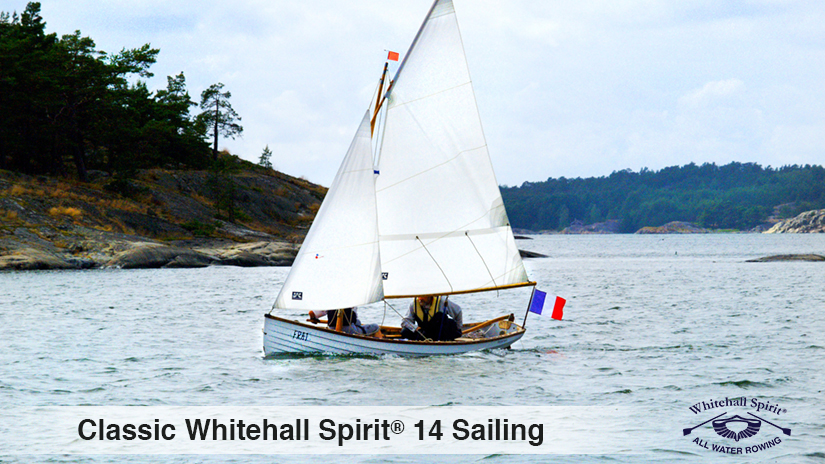 Whitehall boats are perfect for people to learn how to sail and row.

Being able to smoothly row home when the wind drops is a great advantage. Teaching the kids or grandkids how to sail and row along with boat handling skills is very popular. Sailing models feature a pivoting cast bronze kick-up centerboard and teak kick-up rudder. This boat can float in as little as 6” or 15cm of water with the centerboard and rudder raised. This model can be three boats in one; a traditional rowboat, a slide seat sculling boat and a sailboat. 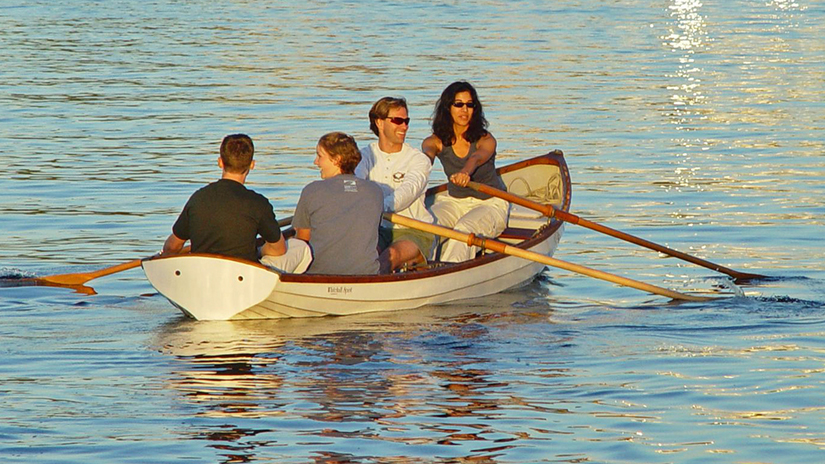 In the early days before small engines were available, Whitehall rowboats were considered the best working boats on the harbor The 17′ Whitehall rowboat was the favored size. This boat that could easily be handled by one person and could also carry several people. In those days Whitehall boats were used by everyone from harbor police to water taxi operators in ports like New York City and San Francisco. 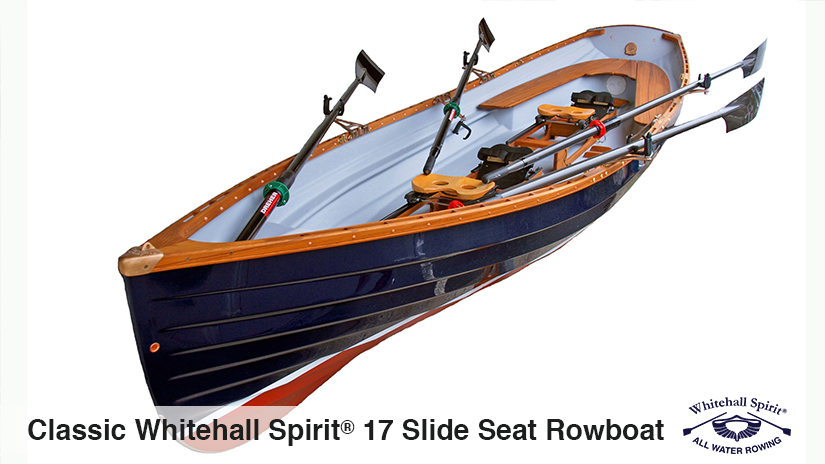 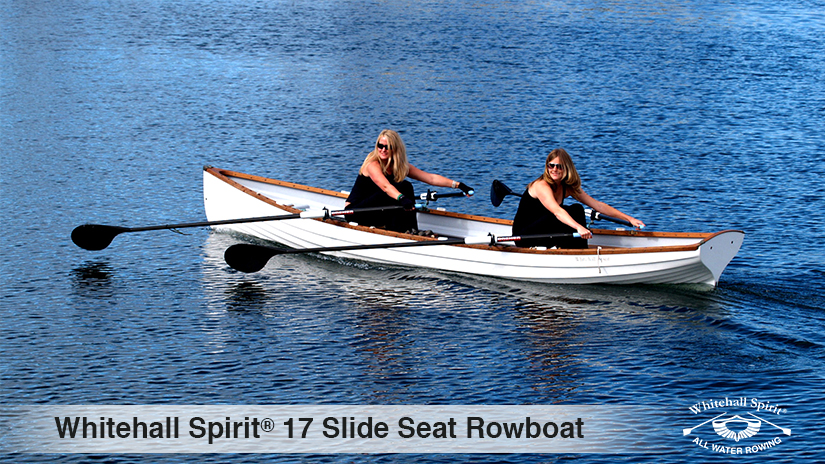 The Classic Whitehall Spirit® 17 has two slide seat rowing positions. Rowing a double is like doing a slow dance, waltzing across the water with both rowers keeping perfect time matching each other’s stroke with the rear position leading the dance. While some prefer to row alone, many think it’s fun to have companionship while out rowing, plus the power of two rowers stroking together is quite noticeable.

This model can also be rowed by a single rower. 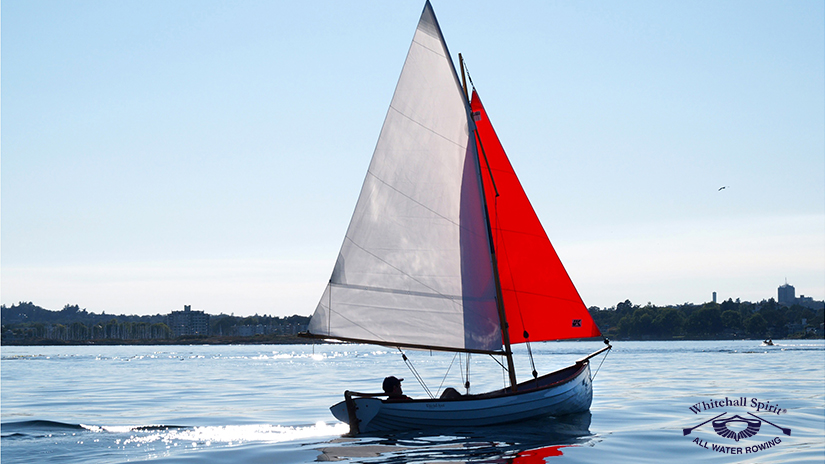 Sailing Classic Whitehall Spirit® Models feature standing lug sail rigs that are super easy to handle and look like a traditional gaff rig. These boats are equipped with bronze pivoting centerboards that are virtually rock proof, and a tiller and rudder that tips up, allowing sailing or rowing in water as shallow as 6” or 16cm. 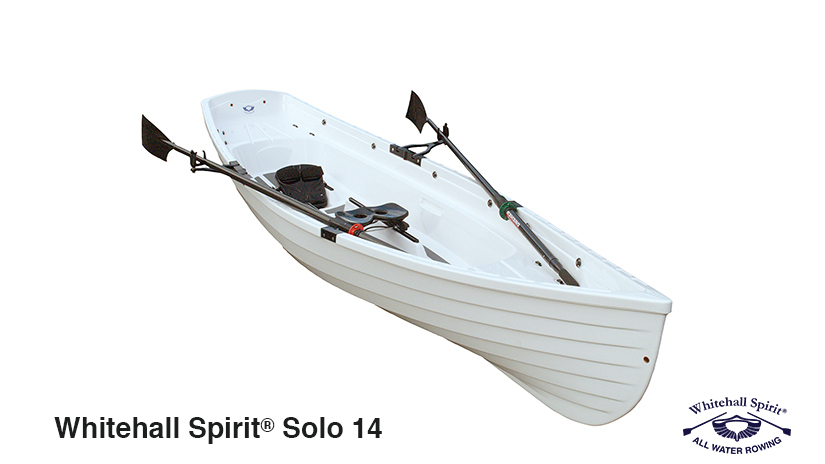 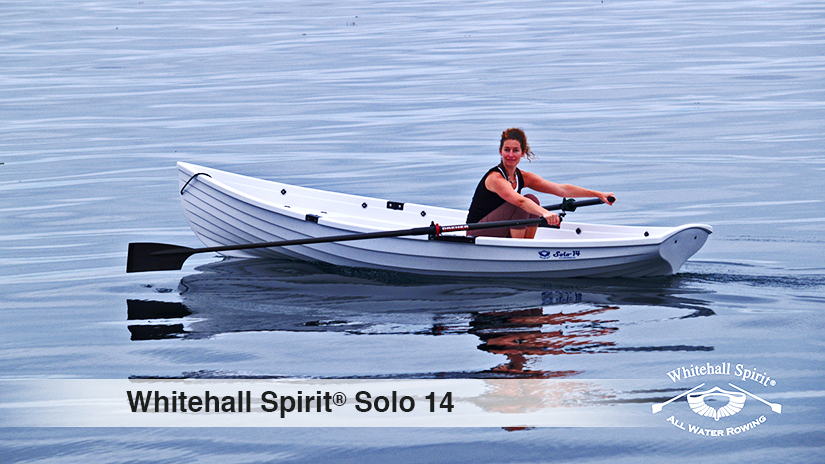 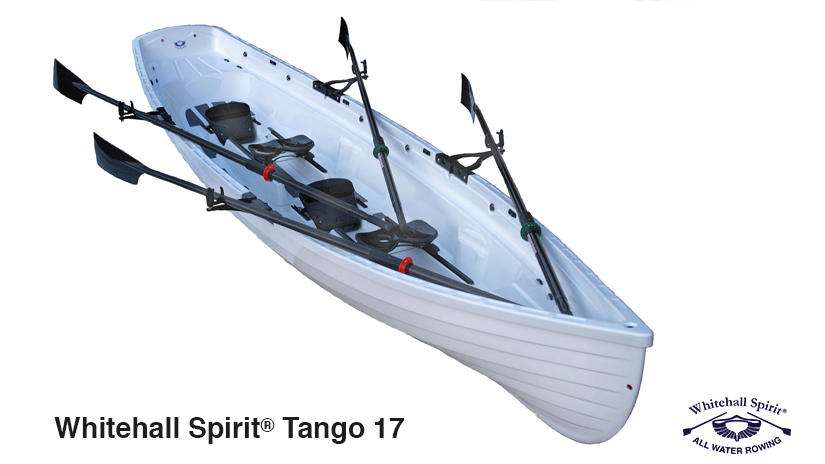 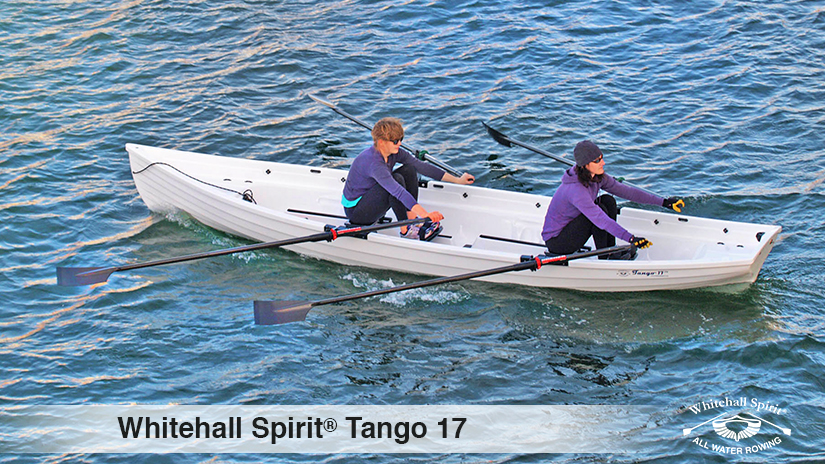 In 2008 in response to a growing demand from customers for zero maintenance and lower priced slide seat sculling boats, Whitehall Rowing & Sail added new technology to their boats and production facility. It was the first company in the world to produce Whitehall Spirit® rowboat models in thermoformed copolymer plastic. These models are virtually maintenance free, lightweight and ultra tough, lightweight but without any woodwork. They are fitness machines par excellence, treasured by owners who row for the fitness benefits as well as pleasure but have no time or desire for maintenance of their boats. The Solo 14 and Tango 17 are now the two most popular boats sold by Whitehall Rowing and Sail.

Complete information and pricing on both of these models at: Whitehall Spirit® Solo 14 & Tango 17 Slide Seat Rowboat Models 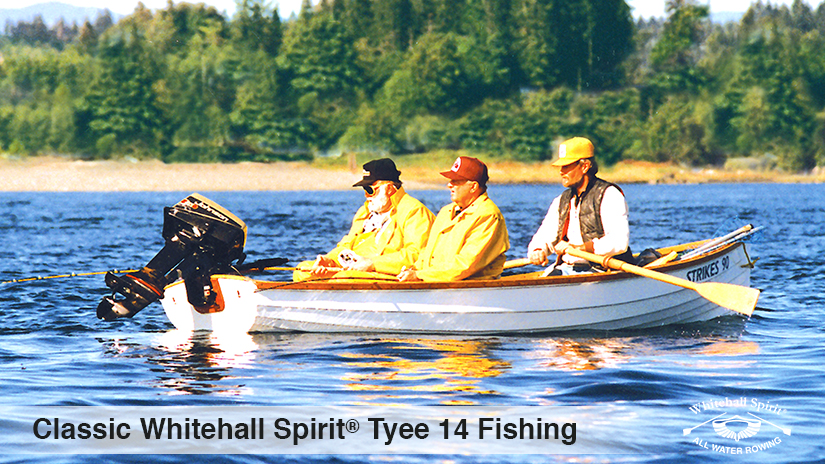 The Classic Whitehall Spirit® Tyee 14 was originally built in wood by Campbell River builder Ned Painter in the early 1900’s. He built dozens of these boats that were used as salmon fishing guide boats by professional fishing guides for over 100 years. The Classic Whitehall Spirit® Tyee 14 is an exact replica of the original Ned Painter boat built with a lapstrake styled fiberglass hull and impeccable teak woodwork. Many are used for row trolling where fishing with a motor is not allowed such as at the famous Tyee Pool in Campbell River, BC. and a few for Muskie fishing in the lakes of Wisconsin.

A full Blog Report on this model is at: History of the whitehall Tyee Fishing Rowboat, A Century Old and Rowing Strong. 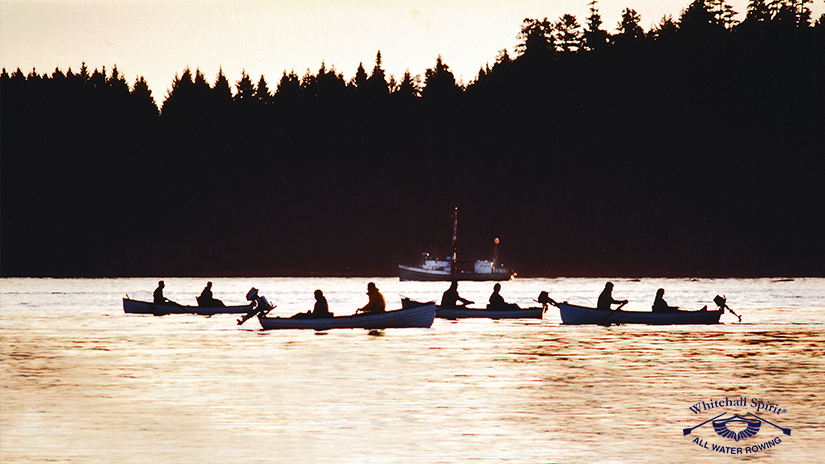 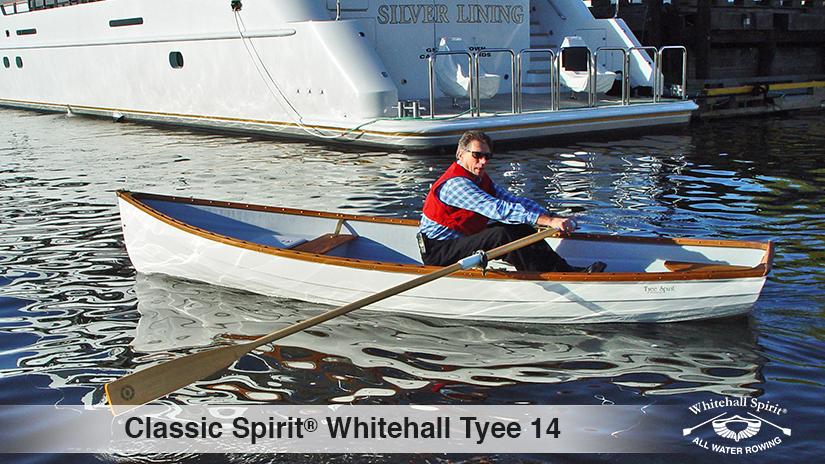 The Whitehall Spirit® Tyee14 Slide Seat Sculling Model adds a fitness sculling component to this versatile rowboat. The slide seat sculling unit is easily removable, converting the boat back to a traditional rowboat or allowing conversion to a roomy sailing model. 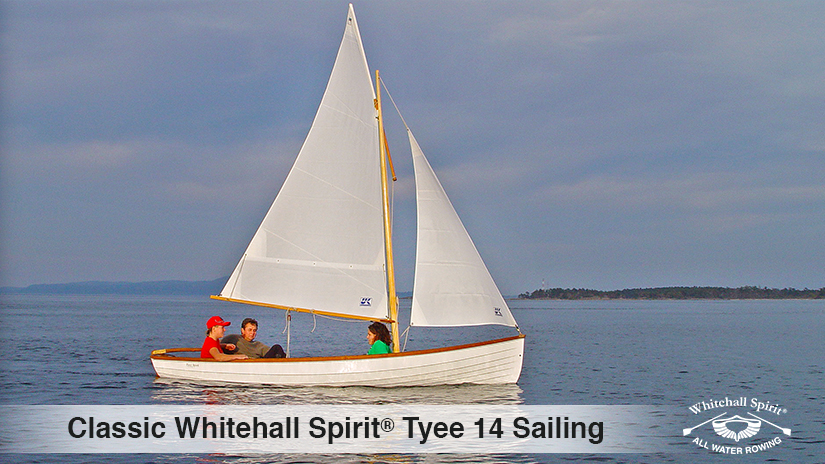 The sailing version of the Whitehall Spirit® Tyee 14 with its fuller hull shape offers ample room aboard for sailors and crew. It features pivoting bronze kickup centerboard and teak kick-up rudder. This means this boat can float in as little as 6” or 15cm of water with the centerboard and rudder raised. 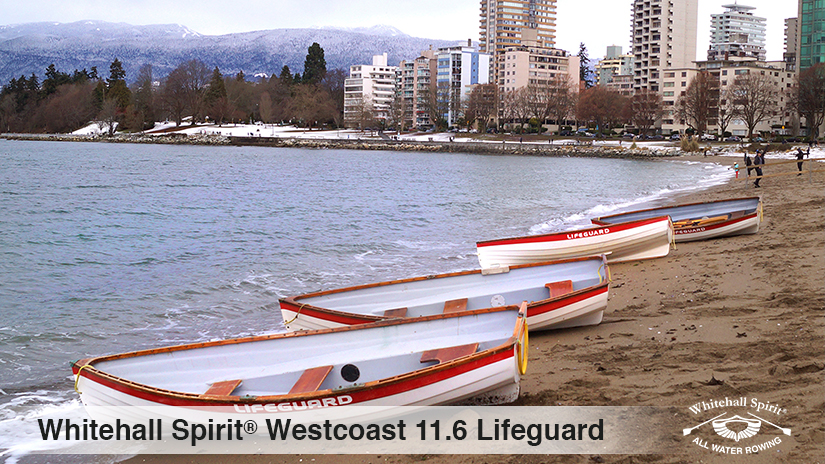 The Whitehall Spirit® West Coast 11.6 is a perfect boat suited for a variety of uses. It’s quite famous in its role as a lifeguard rescue patrol boat. The City of Vancouver owns a fleet of 20 boats that the lifeguards use to patrol the many beaches there. It’s fast and able to handle the occasionally rough waters of English Bay. It is easily and quickly launched by a single lifeguard. It rows well with a single rower and also with three or four adults aboard. These abilities have made it a favorite lifeguard rowboat for over 20 years. 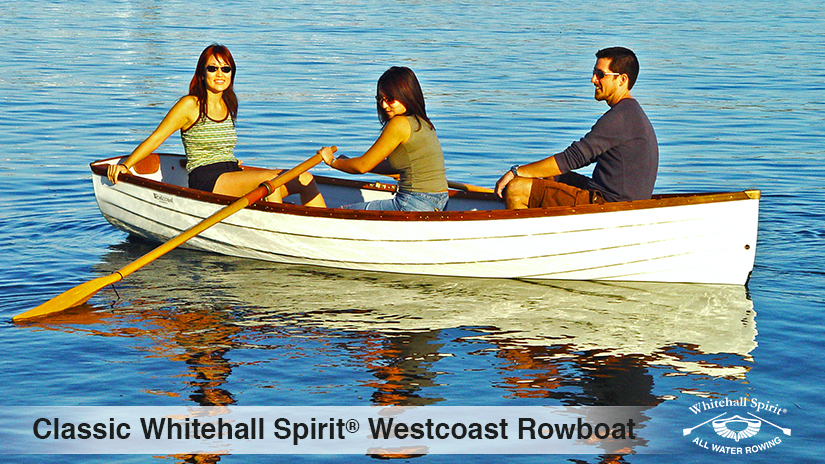 Owners all around the world love the West Coast 11.6 Traditional Rowboat. The traditional rowboat version is fitted with standard fixed seats and regular oars. It carries up to four adults and also works well with a small outboard motor. Power yacht and sailboat owners love it as their favorite tender and shore boat. Perfect for puttering about, fishing, photography, exploring, or just plain fun with the family. 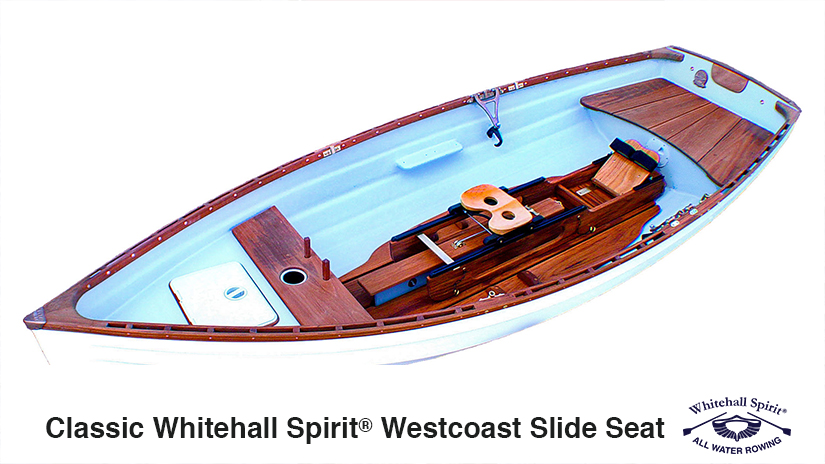 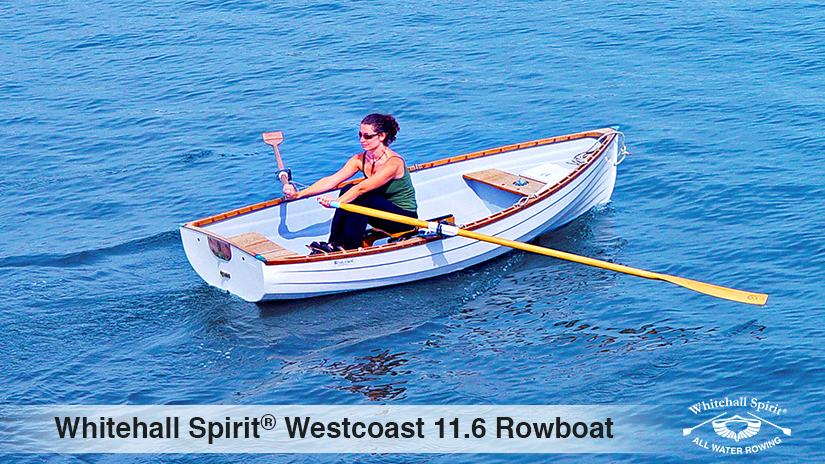 The West Coast 11.6 slide seat sculling model performs well as a sculling rowboat. It rows through the water very quickly. Perfect as a yacht tender or at the cottage providing exercise and fitness for all. The sliding seat rowing unit is easily and quickly removable to revert it to a fixed seat rowboat that performs the roles of the traditional model of this boat. Be sure to check out the sailing version of this model shown below that adds even greater versatility to this boat.
.
Complete information and pricing at: West Coast 11.6 Slide Seat Sculling Rowboat Model 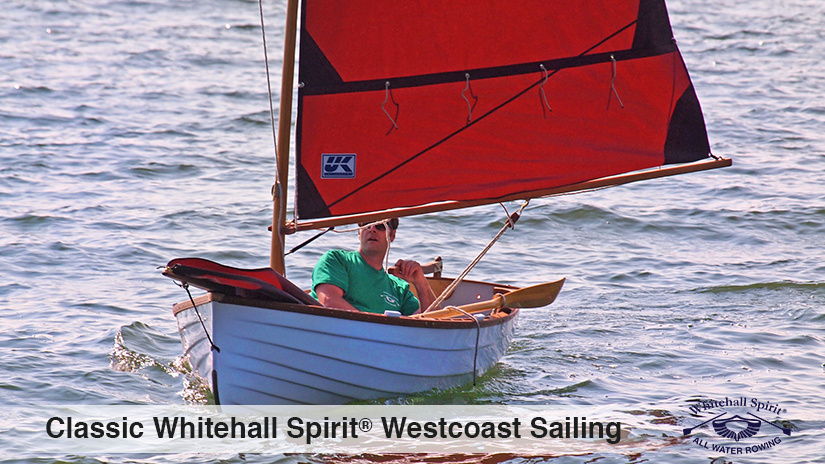 The West Coast 11.6 sailing model is a thing of joy that many owners say is more fun to sail than a sailboat many times its size. At a distance, the sail rig gives the appearance of an elegant gaff rigger although the sail rig is much simpler, making it far easier and fun to sail. Many owners report it’s perfect for teaching themselves how to sail or teaching their kids or grandkids how to sail and row, along with introducing them to boat handling skills. It features a pivoting solid bronze kick-up centerboard and teak kick-up rudder. This boat can float in as little as 6” or 15cm of water with the centerboard and rudder raised. 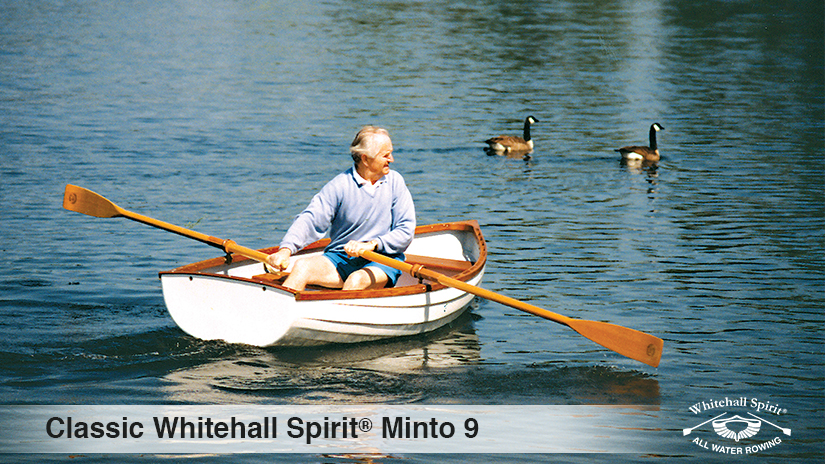 The Minto 9’ dinghy is the smallest of Whitehall Spirit® boat line. This elegant little boat is right at home on the deck of the finest yacht and often used as a shore boat or tender. It carries up to three adults. The Minto 9 is often enjoyed as a cottage boat on a lake. It rows exceptionally well and has generous freeboard, well positioned fixed seats and bronze oarlocks. This boat performs efficiently in a variety of wave conditions. It is also renowned for its stability when boarding. The full bow shape and tracking keel allow for safe and easy towing. The Minto can also handle a small outboard with its reasonably flat aft bottom proportions and robust transom.